Garden State Track Club is a 501(c)3 non-profit organization that aims to serve all levels of runners in New Jersey. Our goal is to provide direction for competitive runners of all levels, and to foster the future of New Jersey running by providing support to underprivileged young runners throughout the state.

To these ends, we will develop structured training and meaningful race schedules for our members in all running venues: roads, cross-country, and track. Our fundraising efforts will enable us to provide guidance, equipment, and financial assistance to young runners in need. 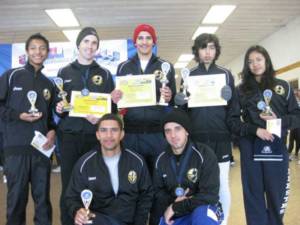 Chuck Schneekloth returned to New Jersey after ten years on the West Coast. After numerous years racing for West Valley TC (San Francisco) and Northwest AC (Portland), he looked for something similar in NJ.

Realizing most local teams were geared toward masters runners, he called his former Rutgers teammate, Chris Tafelski. They agreed the state, known for its competitive running, needed a club geared toward a younger, faster demographic.

After bringing in friends Steve Bonica, Alex Fowlie, Amy Porpora, and Cathy Stutzman for help, they settled on a name (Jersey Track Club was a close second), logo (team colors were almost green and yellow), mission statement, and set the first team run to be Sunday, October 3, 2010. With only nine people on the email thread, just three people showed up.

In January of 2011, two major events happened. First, superstar Metuchen HS/Seton Hall sprinter Tyrone Ross emailed the club, asking to start up a sprint group; Schneekloth, his former high school teammate, agreed to coach it. Ross also introduced the club to his former Georgia Tech teammate Bryan Swarn, the CEO of Phenetix, who has consequently designed all GSTC gear from his labs in Atlanta. 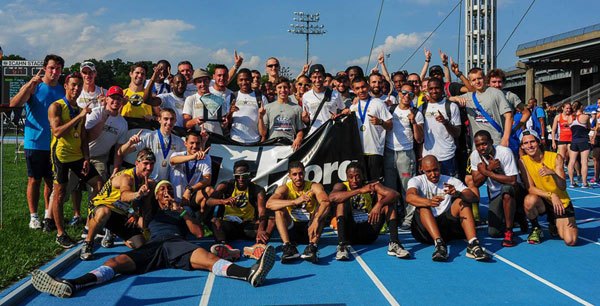 In 2012, they grew a lot, won a lot of stuff, and invented the infamous “Tim Morgan Award,” presented in the team’s weekly email for members who made bonehead decisions that week. Veteran members fear the “TMA” and do everything they can to avoid landing in the section of the weekly missive, although many admit it’s the first section they read. It is now known as the “Totally Misunderstood Award.” 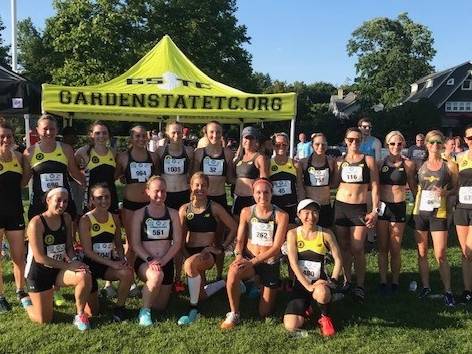 In the spring of 2013, the USA Track and Field designated the GSTC as one of 23 Elite Development Clubs in the country. On June 29th, 2013, the club won its first national title at the USATF Club National Track and Field Championships at Icahn Stadium on Randall’s Island, NYC. By year’s end, they won the USATF-NJ Overall Grand Prix Championship with an association record 521 total team points.

In January of 2014, the club signed a three-year deal with Adidas and Global Athletics. There were three goals: support the elite runners and leadership members of the club, support the Adidas Diamond League Grand Prix, and support the Adidas brand within the tri-state area. 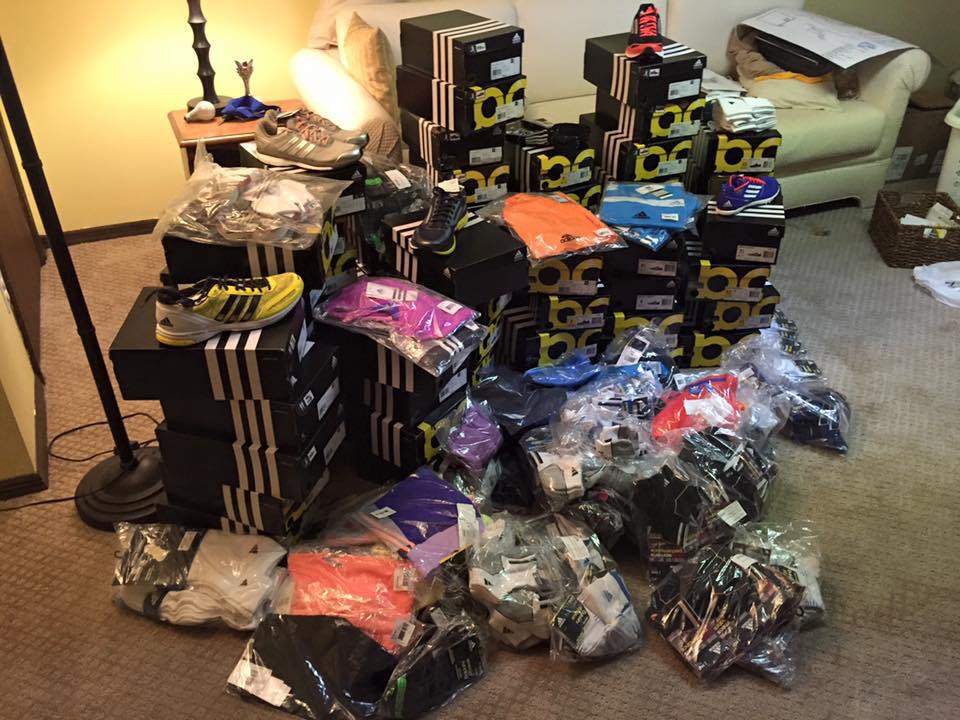 In 2015, the club swelled to over one thousand members. This enabled another easy win in the 2015 USATF-NJ Overall Team Grand Prix, as the club broke the association’s all-time points record for the third year in a row. Both the men’s and women’s 40’s teams finished second overall.

This year also saw the team win their first Millrose Games gold medal, as the relay of Isaiah Gill, Jamal Roberts, Tyrone Ross, and Dylan Lowry dominated the sprint medley relay. This inspired two articles about the club on RunBlogRun here and here.

Later that track season, Christina Epps won the 2015 USA National Title in the triple jump, allowing her the opportunity to compete at the World Championships for Team USA. Masters athlete Anselm LeBourne won two world championships, in the 800m and 1500m, at Lyon, France. Along with breaking two world and three American records, the USATF selected him the Masters Athlete of the Year. In December, the men’s distance crew finished an impressive 7th at the USA Club National Championships in San Francisco. Alfredo Santana and Olympic Trials Marathon qualifier Matt Gillette helped the group with its highest team finish in club history. 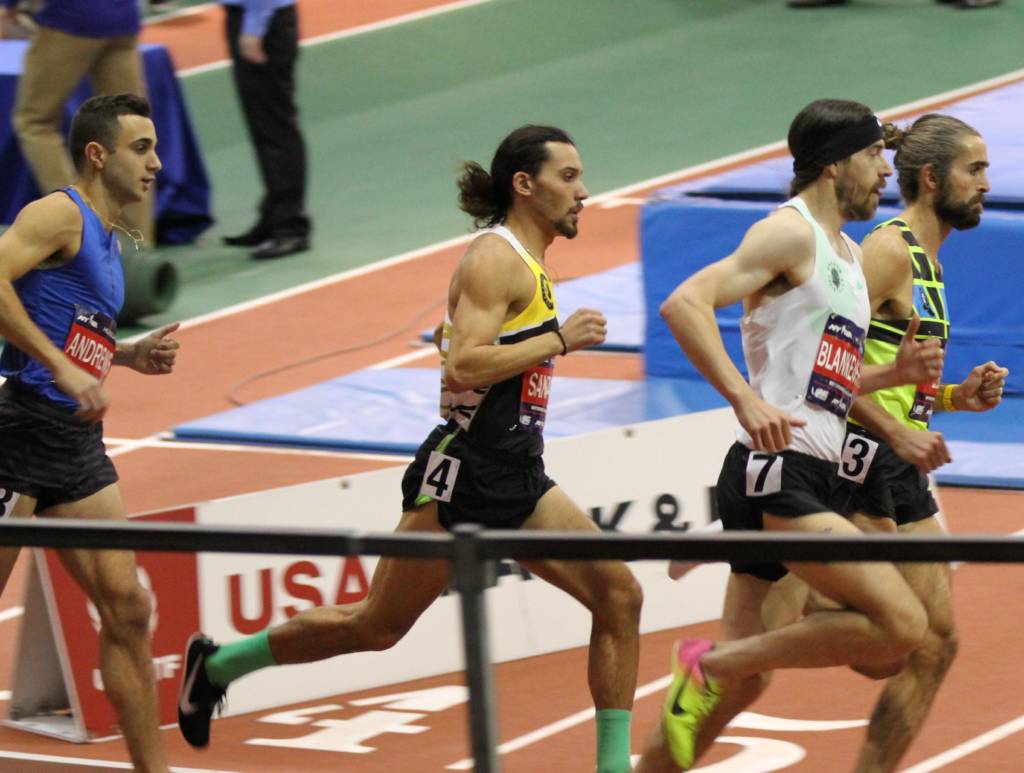 The Millrose Games foreshadowed a big year in 2016, as both the men (9:49.30) and women (11:37.66) won the distance medley relays. A month later, Epps won a second US triple jump title, this one indoors, and she competed in the World Indoor Championships a second time.

On June 25th, the club swept all three national club titles on the track: men, women, and combined. It was the first time the club competed in the meet since winning the men’s title in 2013, and meet officials voted Alfredo Santana as the men’s Athlete of the Meet after winning the 1500m and 5000m. 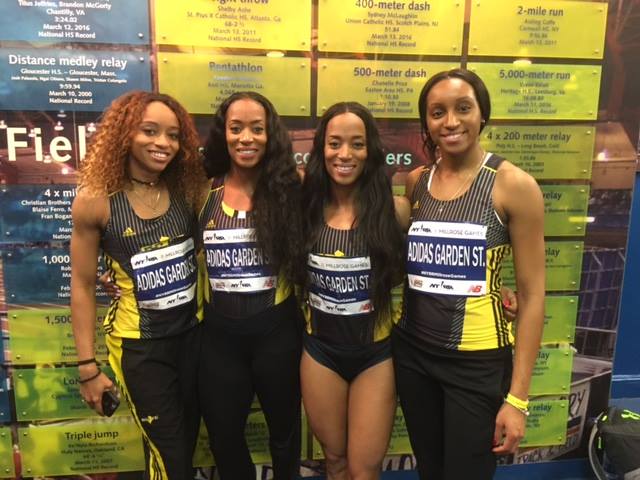 In 2017, the GSTC returned to the Millrose Games and won the men’s DMR and women’s 4×200 relays. In the latter, Miki Barber, Lisa Barber, Jessie Gaines, and Mariah Toussaint teamed up to break the Millrose Games record–a GSTC first. Later that spring, Tyrone Ross won the 400m 35-39 national title in New Orleans- the first one in GSTC history.

Two new, major initiatives started this year for the club. The first was hosting the Garden State 10, a collaboration between the Franklin Police Department and the Cancer Call Out. The second was the GSTC Youth Team, a group that now began meeting consistently thanks to the leadership of Nimesh and Rekha Trivedi. Meanwhile on the roads, the distance crew had another great year, winning another USATF-NJ Overall Grand Prix title. Lead by superstar and Olympic Trials qualifier Josh Izewski, who rewrote the entire club record book, the men finished 9th overall at the USATF Club XC National Championships in Lexington, KY. 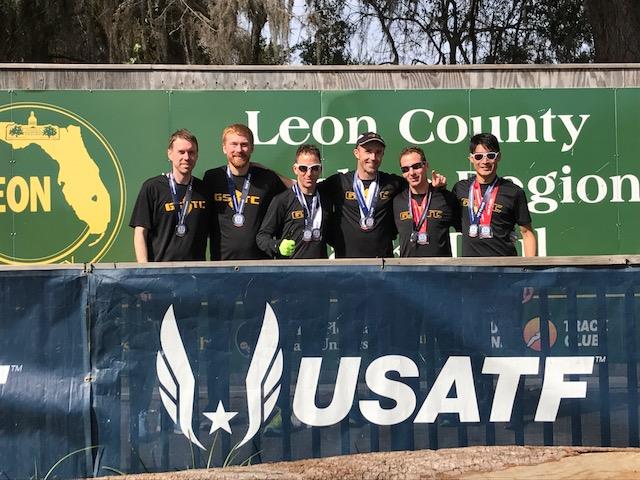 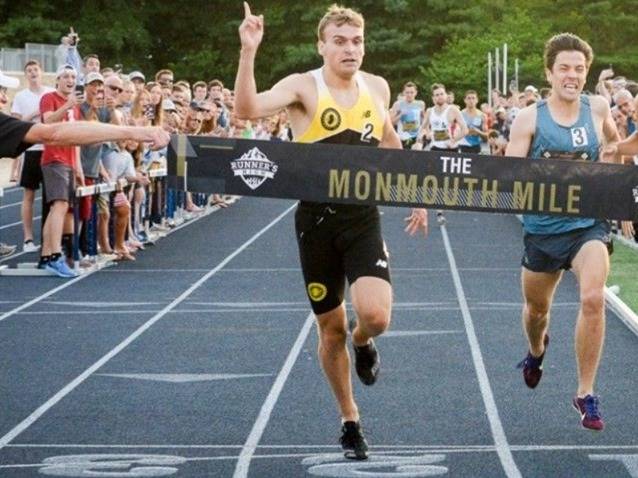 The club, once again, won the USATF-NJ Grand Prix with an association record 1,030 team points; the second place team was a distant 300 points behind. The M40s team also repeated their USATF Grand Prix national team title, winning it in dramatic fashion in the last event of the series, the Tulsa 15k, thanks to efforts by Jonathan Frieder, Elliott Frieder, and Shawn Williams. Months prior, Chuck Schneekloth won the Masters Road Mile by .04 in Flint, MI., the club’s first ever individual road national title, helping the M40s squad inch closer to surpassing the Atlanta Track Club in the team standings.

At the US Championships, Olivia Baker ran 2:00.94 for fourth in the 800m, edging out future Olympic gold medalist Athing Mu. Robert Downs also made the final, running a club record 1:46.46 to finish 8th overall. Later that summer, Eric Holt won the Monmouth Mile in 3:58.88, making him the second GSTC athlete to break 4:00 in the mile.

2019 was the best year for the men’s sprint squad. James Bias, Talyn Washington, Robert Moise, and Jovanni Parkinson won first-ever gold medals for the club in the 4×200 at Millrose and the 4×100 Olympic Development at Penn Relays.

At year’s end, some open men expressed an interest in creating their own racing team. After weeks of discussion, brokered by former VP Ken Goglas, agreements were finally settled at a coffee shop in North Jersey in late December. 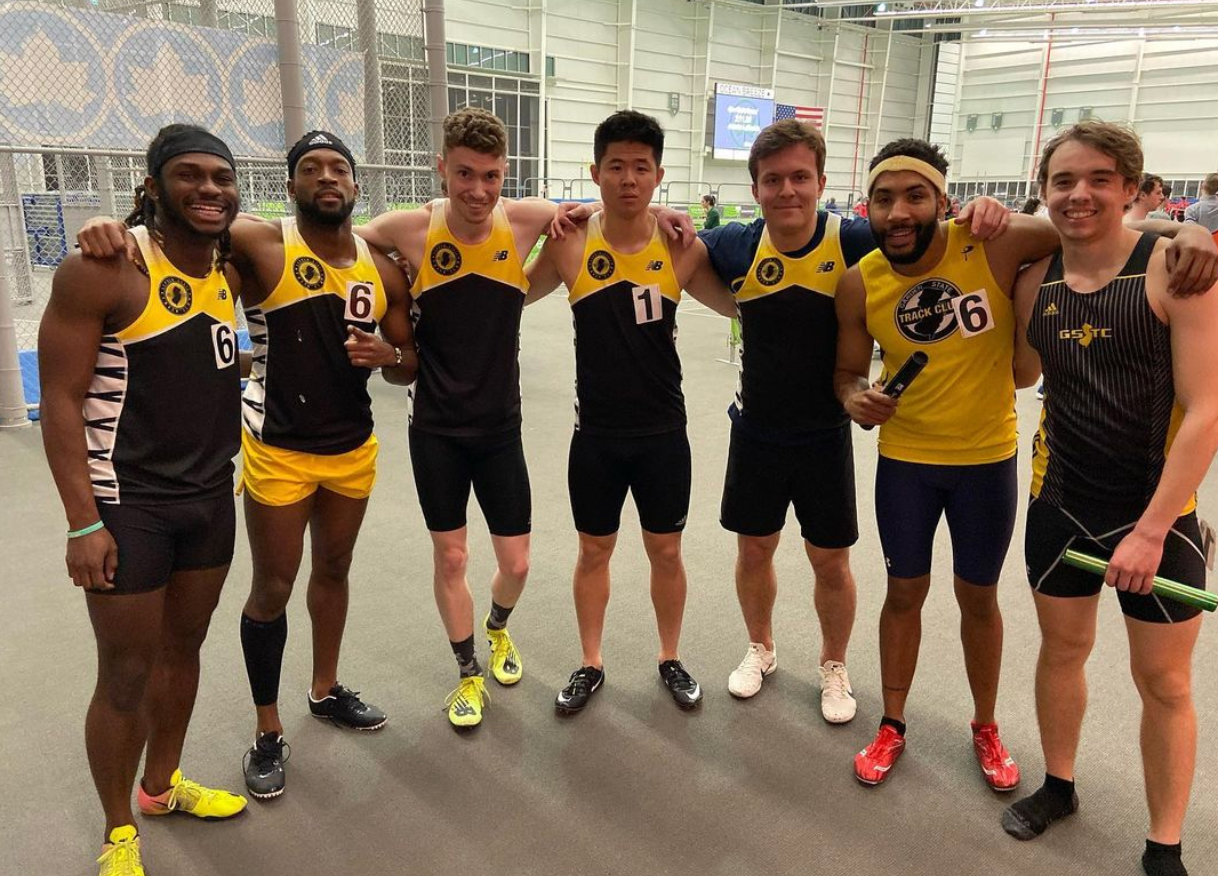 Later in February, four GSTC women competed at the Marathon Olympic Trials: Laura Cummings, Shelby Goose, Niky Mateescu, and Alexandra Niles. Months later, while racing was shut down, the USATF-NJ and GSTC agreed to make a greater effort to work together after years of challenging discourse. 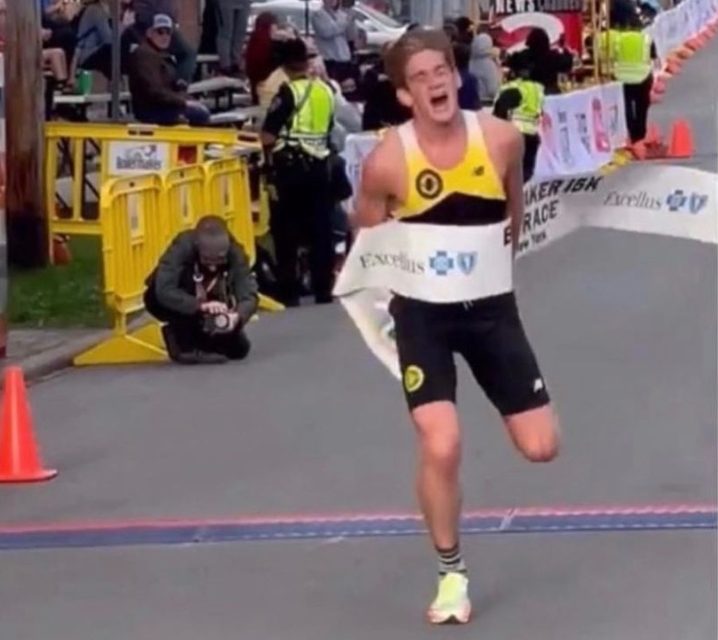 Although no road races took place in the spring, the club hosted seven track meets for youth, high schoolers, collegiate, and post-collegiate athletes. Like the fall, it required some strategic planning that many school and universities weren’t able or willing to do.